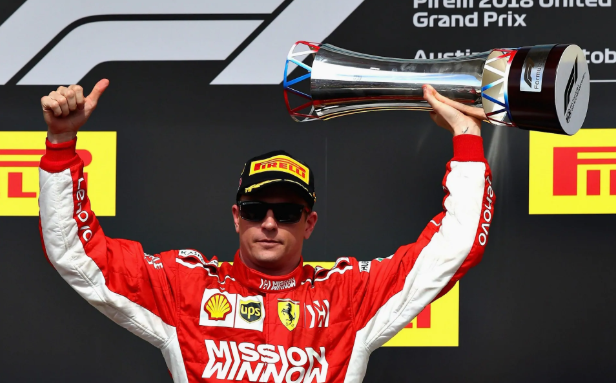 With a prize as great as a fifth Formula One world title at stake, it was only fitting that Lewis Hamilton should have to work for it. In a riveting pot-boiler of a United States Grand Prix, he strained every sinew in pursuit of his prize, weaving all over this Texan track in his quest to hunt down Max Verstappen, but ultimately had to settle for third place and a coronation deferred. As that wily veteran Kimi Raikkonen gatecrashed the party, grasping a first win in over 5½ years, the champion-in-waiting realised he would need to wait another week for his moment of history.

Given he holds a 70-point lead over Sebastian Vettel, his only challenger, with just 75 to play for, it is all but certain that Hamilton will secure his place alongside the immortals in Mexico City next weekend. Here he was gracious enough to cede the stage to Raikkonen, who at the age of 39 offered a powerful testament to his ageless talent, outpacing pole-sitter Hamilton off the start line and managing his tyres perfectly until the end. Indeed, Hamilton looked almost relieved not to be the centre of attention for a few minutes, as questions about his imminent status as a quintuple champion faded amid the surprise at the Finn’s victory.

Under cornflower skies in the Lone Star State, very little about this Austin race unfolded as predicted. Hamilton, expected to assert his supremacy on a circuit where he had won four years in succession, lost out to Raikkonen at the first corner and became sucked into the tensest battle with a defiant Verstappen. As for Vettel, he committed yet another cardinal error, tangling with Daniel Ricciardo and falling briefly to 15th on a day when he needed to make hay. Ultimately, he did well to cross the line fourth and drop only three points to Hamilton, even if his deficit to his rival now looks unassailable.

Hamilton was sanguine as he prepared to wait another seven days to reclaim centre stage. “Kimi made no mistakes,” he said. “He drove fantastically well and I’m really happy for him.” There was a trace of irritation, though, at the strategic miscalculations that denied him a shot at wrapping up the championship with three grands prix to spare. “As a team, we didn’t perform that great today,” he said. “It was a like a double-bogey for us this weekend. I thought we would be able to do better. Once Kimi was ahead, I didn’t have the pace to challenge him. We’ll just have to keep working, keep pushing. It can’t always be perfect.”

For all that a monumental feat for Hamilton was anticipated, Raikkonen’s triumph was rapturously received here at the Circuit of the Americas. He had not stood on the top step of the podium since Melbourne in 2013, in a Lotus uniform, and this result brought just reward for years of tolerating Ferrari’s preferential treatment of Vettel. While his “Ice-man” moniker is well-deserved, his mask of inscrutability has slipped a little of late, possibly as a consequence of becoming a husband and father, and his post-race smile could hardly have been broader. In the circumstances, it appears frankly perverse that he is being forced to accept a demotion to Sauber from next year.